This error is caused by leftover references to ".cred" files on the riteSCAN server in the "SystemManager.xml" file. When a user logs in to riteSCAN, a "cred" reference is created in this file which points riteSCAN to a .cred file in the users directory. The existence of this reference uses up an open license seat in riteSCAN. When the operator logs out of riteSCAN, the cred reference and .cred file are removed, freeing up a license seat.

In some cases, orphaned cred references may occur such as when the application is closed suddenly due to a hard reset or dead battery on a handheld device.

NOTE: Also verify that the "Allow multiple logons" setting in riteSCAN Administration is not checked: 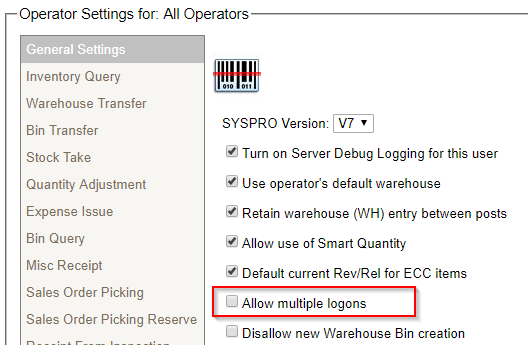 To view user's who are currently consuming a license seat, open the riteSCAN Admin application and click on the Manage Logins tab.

To resolve this error:

Option 2: Follow the steps below for your version of riteSCAN:

Open the riteSCAN Administration Application and navigate to the Manage Logins tab, look for any entries for "Unknown User" and click Remove Logon.

For all prior versions (this process can also be followed for newer versions as an alternative to the above procedure):

2. On the server, delete or rename the following files if they exist: